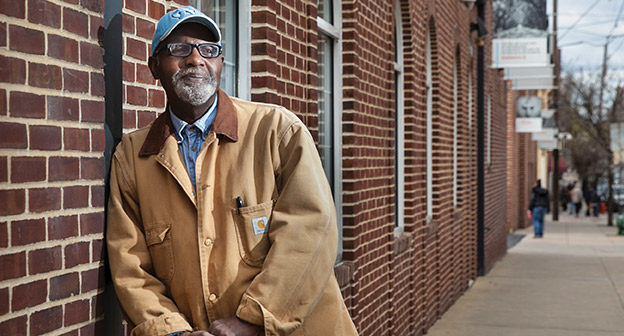 Growing up in the projects of North Philadelphia, Bill got caught in a grip of addiction that would stay with him into adulthood. Despite his secret drug use, he tried hard to be a ‘good guy’ – being with one lady and always showing up to do his best at work. Over time, he found it harder and harder to maintain his responsible external image and his life spiraled downward and into homelessness.

Bill stumbled into Water Street thinking he was entering another rehab facility for drug abuse, then quickly realized it was a Christian program. “When I heard that, I made the decision to surrender and stay. I wanted to surrender all of my past. My word became surrender.”

As Bill began to learn about the Bible and the life of Jesus he grew in his realization that he could surrender his problems to God. He decided to attend church regularly and even when he didn’t feel like it, he would surrender and stick with his commitments there and at Water Street. It wasn’t easy, he recalls, but it was worth it, “I stuck and I stayed and as time went on my life started changing. I just kept surrendering and kept surrendering. I started to believe that I didn’t have to live my life the same anymore.”

“With their actions they showed me love, they stuck with me and showed me a different way of life.”

One of the most instrumental influences in Bill’s life was a man from his church, named Mark, who agreed to mentor and guide him. Mark jumped right in and began to walk beside Bill as Bill continued to surrender to God. When Bill looks back on the beginning of his mentorship with Mark, he calls it the best decision of his life. Mark and his family provided stability and authentic relationship, even bringing Bill into their vacations, and holiday gatherings. “With their actions they showed me love, they stuck with me and showed me a different way of life.”

Bill continued to be committed to his program at Water Street, his church, and his relationships with Mark and God. Bill continued to hold on and surrender his life daily to God. Eventually a job opened at Mark’s place of employment to work in maintenance. Bill applied and landed the job! As Bill became more financially stable, he was able to buy a car and eventually, rent a room.

Bill now lives in his own home and continues to work in maintenance. “My prayer is to stay in the Lord’s will, He keeps telling me ‘I got you. All you have to do is stay. I got you.’ Through all the trials, He tells me, ‘I got you.’” Bill is looking forward and continuing his journey with God and with a community of friends. Though Bill is no longer at Water Street, when he visits, he is reminded of the opportunity waiting for others who come to the mission ready to surrender. “To have a net, a place like Water Street, to catch people when they’re in need is very important. They were offering me a way to grab on and change my life. I tried to do the best I could with it and I am so grateful to Water Street and all the financial supporters who gave me a place to change.”