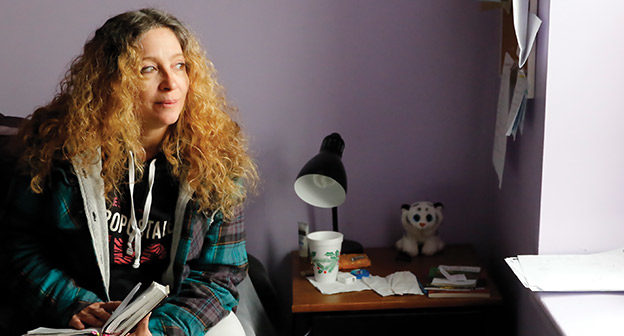 Leslie was exposed to drugs and alcohol when she was just eight years old. While she describes her upbringing as having good parents, as the youngest of five, her older siblings used to have fun getting her stoned and telling her that’s what the cool people did.

Once that hook was set it would control her for decades to come as she became dependent on heroin and married a man who also had drug and alcohol addictions.

Things began to unravel as both their moms died within 19 days of each other. Having enabled the couple’s drug use for years, their passing left Leslie and her husband without a safety net.

Despite moving into the home that was left to them by her mom and getting clean and sober, they were unable to make ends meet and Leslie was due to serve time for past drug offenses. Her husband became a resident at Water Street Mission.

Leslie is working to get her GED and they are focused on building a more firm financial foundation.

Leslie recalls feeling odd when she was released from prison and joining her husband at the Mission. She was thrilled to see him, but of course was frustrated by the lack of privacy and inability to be together like a normal married couple. Seeing Pastor Booth, whom she met while in prison, made Leslie feel more comfortable and together, she and her husband applied themselves – taking advantage of opportunities for growth.

As a couple, they were understandably eager to begin a new life on their own, so when they had saved enough from her part-time job and his painting work with a local subcontractor, they rented a room and moved out. However, they realized it was premature when the work dried up and they were unable to stay on their own.

Since then, they’ve moved back to Water Street. Leslie is working to get her GED and they are focused on building a more firm financial foundation so their next move out will be permanent. Despite it being a humbling time, Leslie was touched by the fact that when they returned, they were welcomed with hugs. No one made them feel bad about being back a second time.

When asked about why someone might want to support Water Street financially, Leslie exclaimed, “It is magical here. It’s not the Magical Kingdom, like Disney, but to fix broken people, you couldn’t be at a better place – honestly.”