Restored To Be Restorers 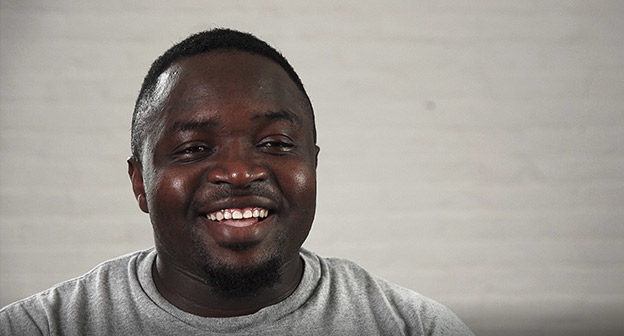 Being born in Rwanda during a time of civil war made for a tough upbringing for John Rushemeza. He recalls that at 9 years old, when the conflicts broke out, there was a lot of killing and genocide and his family was forced to flee to Congo, eventually settling in Zambia.

While he grew up in the church, he chose to deal with his inner turmoil in a different way than his siblings … having his first taste of alcohol at 10 … with his family and everyone else in his community identifying him as an alcoholic by the time he was 15.

When he came to the United States, John was, in his words, “messed up” – selling drugs and even winding up incarcerated.

“I really have the testimony to tell people… through God all things are possible.”

Upon John’s release from prison, he visited his sister to ask her for a pair of shoes. His sister shared with him that she was scared to pick up the phone, fearing being told that he was dead. She also shared that she wasn’t proud to tell him that she was pregnant (with the first addition to John’s family) because he was “no good and wouldn’t be around.”

It hit John that there was going to be a new member of the family that “could potentially look down on him like everyone else.” He decided at that moment that he needed to do something before this new life came into the world. John wanted the child (that would become his first niece) to be able to hear stories about how he was and “maybe not even believe it.” He didn’t want her to experience the heartache that he put his brothers and sisters through.

When he first came to Water Street Mission, he met with Chuck, his case manager, who showed John love and understanding and explained the resources that were available to him at the Mission. John also had other men in the residence who offered to talk with him and pray with him, showing him love and acceptance.

Prior to coming to Water Street, John’s idea of a mission was just a place where homeless people came to sleep. But as he actually saw more and more what Water Street had to offer, he purposed in his heart to take advantage of it. With our Enrichment Center staff walking alongside John and counseling him, he learned to use a computer and attained his G.E.D., and he got connected to his church family where he still serves.

Believing that God spared his life for a reason, after his successful move out, John applied to work at the mission and serve others who are like he was. John is currently a life coach, which he describes as the “best job in the world.” Every day, John uses his past experiences and perspective of being “on the other side of the fence now.” John is happy that he has the testimony to be able to tell people, from experience, that with God, all things are possible.

We celebrate the restoration in John’s life and we’re thankful that he is using that restoration to restore others!