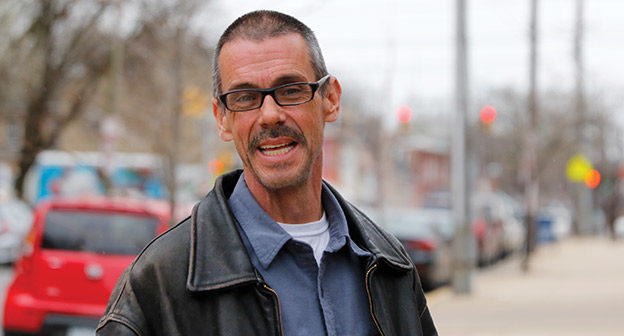 From the time he was 15 Austin spent a lifetime running from his problems by using drugs and alcohol to self-medicate and escape from conflict and pain. While, as an adult, he would go through periods of time when he would be sober for years on end, Austin would eventually fall off the wagon – once even missing his youngest son’s wedding because he was too ashamed that he’d been using again.

With this failure making home life untenable, Austin again tried to run from his problems ending up in Lancaster County where he stayed with a friend that encouraged him to get help at Water Street Mission.

“He put people in my life at Water Street who care about me and love me. I am so grateful.”

At first Austin was reluctant and frustrated but decided it was worth a shot, “I made a lot of poor choices in my life but this is probably the best choice I ever made.” Austin was welcomed into the Mission by staff that began to work with him. They walked alongside Austin and helped him deal with the presenting symptoms of his addictions and escapism. They also helped him recognize the root issues that would trigger these choices. “It is a great thing to stop using drugs and alcohol but if you don’t recover, if you don’t work on the stuff that is prompting you to turn to those substances, then it’s for nothing.” Austin began to awaken to his true identity in Christ and was filled with hope as he felt God enter the situation and guide him towards restoration. “God is the main reason Water Street works. He is in charge of this place. God has always been with me, and I’ve always chosen to run away. But here He is giving me the tools I need to succeed. He put people in my life at Water Street who care about me and love me. I am so grateful.”

The path to restoration is seldom easy. Austin has had to confront the very things he had been running from. “It is a struggle. I know the enemy is trying to destroy me every chance he gets. I just have to trust in God. He says He gave us His Word to heal us and save us from our destruction, I believe that. I know He is always with me.”

Beyond dealing with his own challenges, before moving out of Water Street, Austin began reaching out to new guests as they entered … encouraging them, helping them “find their way” and connecting them with others. “Not everyone comes here for the same reasons, but the doors are open to anyone, no matter where you come from. If you need help this is the place to come because it works.”

Austin is still running. This time, however, he is running TO his responsibilities … returning to New York to face his past head on. It’s the harder path for sure, but Austin remains hopeful and enjoys a newfound freedom. Recalling his time at Water Street, he expressed thanks to those who support the Mission financially. “The resources given to the mission are put to good use. They are helping people restore their lives and reconcile with their families and with themselves. They are finding healing there. It is truly incredible… I have seen it with my own eyes. Water Street saved my life.”